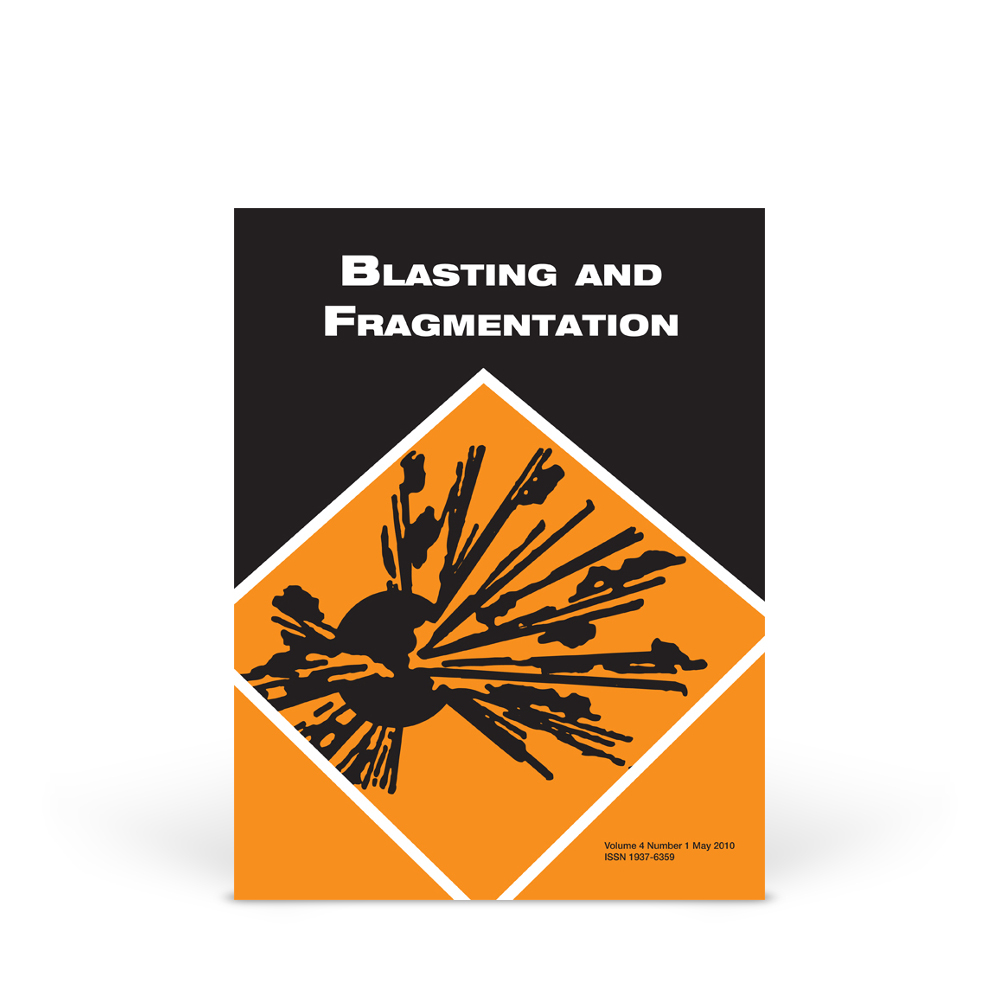 Edited and reviewed by expert researchers, industry professionals, and academics, Blasting and Fragmentation presents contemporary analysis of engineering practices as related to explosives application to rock. This journal is no longer in publication.

By Jhon Silva-Castro and Russell Lamont

Understanding the behavior of materials subjected to high strain rate conditions is of fundamental importance to the mining industry. Several stages of the mining process involve high speed loading rates including blasting, scraping, comminution, etc. Technical comprehension of how rocks deform, fracture, and fail under these loads is a fundamental first step required prior to any serious attempts at optimization of the energy utilized for pertinent activities in the mining process. A Split-Hopkinson Pressure Bar (SHPB) was designed and constructed at the University of Kentucky to study the dynamic properties of various types of rocks. In order to test rock samples, the device was assembled using component steel bars with dimensions of 2 in (0.0508m) diameter and 8 ft (2.44 m) length. Accurate interpretation of the dynamic stress-strain curves obtained by testing requires application of dispersion correction techniques. The dispersion phenomena exhibited by this SHPB was studied through a series of practical tests and then compared to theoretical models. The theoretical calculations and recorded data from this series of tests indicate that the dispersion phenomena in these large diameter bars is lower when compared to results published by researchers testing devices with smaller diameter bars.

This study evaluates the effects of both short inter-hole and intra-hole delay times on rock fragmentation and throw. Full-scale test blasts were analyzed at a granite quarry in Talbotton, GA. This analysis provides a representative understanding of timing effects on fragmentation in the field, different from previous lab scale studies that negate the effect of geology. Inter-hole delay times between 0 ms and 25 ms were tested on a series of 4 bench blasts and subsequently examined using photographic fragmentation analysis methods. The 25 ms delay time was determined to induce the smallest average rock fragmentation size, while instantaneous timing resulted in increased throw with poor fragmentation. An additional 3 test blasts investigated this optimized inter-hole timing while altering top and bottom column primer time to potentially improve throw while maintaining optimum fragmentation. Timings studied are top initiation, bottom initiation, and top and bottom simultaneously. Shock and detonation wave collisions are a potential reason for this increased throw.

By B. Mohanty; A.Siamaki; and K. Esmaeili

Large scale open pit mining and quarrying operations dictate safe and reliable pit wall stability. The current approach of employing the particle velocity-scaled charge distance approach to estimate and minimize damage to residential structures is considered inadequate to protect rock slopes. This study utilizes close-in blasting vibration data as input to an advanced 2D numerical code to study its applicability to serve as a predictive tool in terms of blast-induced rock slope failure. Two tri-axial accelerometer stations, consisting of high frequency and high-amplitude (20 kHz, 100g) sensors, located within ~100m of the blast, but at two different bench levels, were used to monitor production blasts in a limestone quarry. The production blast consisted of double-decked explosive loads in 125 mm (5 in) diameter holes, with an inter-deck delay of 42 ms, and each deck consisting of 130 kg (285 lb) of emulsion explosive. The blasting vibration data obtained at the two bench levels were critically analyzed, and the vibration results served as input to the numerical model consisting of a single rock block with a 45 degree persistent joint plane but with specified strength properties, significantly different from that of the intact rock. The model was able to characterise progressive accumulation of damage in the form of microcracks along the joint surface as a function of the relatively low vibration load from successive explosive decks. The results showed that such a numerical model can serve as a very good diagnostic and predictive tool, when backed up by careful vibration monitoring and further supported by detailed slope monitoring.

Previous researchers have put forward two different theories as to the origin of air overpressure from quarry blasting. In 1980, Siskind et al postulated that the initial face movement gave rise to the displacement of air and that this resulted in the air overpressure pulse. However in 1990 McKenzie et al carried out research that indicated that the air overpressure pulse came into being as a consequence of the shock wave created by the detention of the explosive charge in a blast hole. In an attempt to evaluate these hypotheses, an investigation was undertaken over a 4-year period with the aim of determining the precise origin of air overpressure. The research was carried out at a chalk quarry in the North of England. The choice of this particular location was made on the basis that the rock type is very homogeneous with no discontinuities and the quarry operator carries out small single row blasts but allows full-scale analysis (typically 5 holes per blast). The components that were assessed and investigated were the air blast arrival times in front of the face, the initial movement of the blast face, the precise initiation times of each blast hole and the speed of sound in both air and the rock host. A novel, low cost, instrumentation setup was developed and triggered when the first hole fires. The investigation indicated that the measured shock wave arrival time always occurred sometime after the shockwave had impacted the face but on average before initial face movement. This lead to the conclusion that it was most likely that the transmission of gas through the face, created from the detonation of the explosive charge was the source of air overpressure. However it must be borne in mind that these air overpressure experiments have only been carried out on one specific rock type.

The work presented in this paper mainly involves two parts. Firstly, the fundamental characteristics of the high pressure carbon dioxide gas fracturing technique (CO2 technique), including, a proposed method of TNT equivalence calculation, which is used to calculate the TNT equivalence of discharge of CO2 technique, and the comparison of the explosion volume generated by dynamite and expansion volume of liquid carbon dioxide is conducted to show the differences of fragmentation capacity between the two of them. Secondly, the coal seam fragmentation mechanisms of CO2 technique are proposed, including, 1) Gas jet cutting and penetration by shaped charge, 2) Gas volume expansion by changing phases of carbon dioxide, 3) Coal seam softening by destress blasting and 4) Coal seam fragmentation by discharge vibration, associating with the mechanisms, the equations for calculating fragmentation radius are developed and verified.