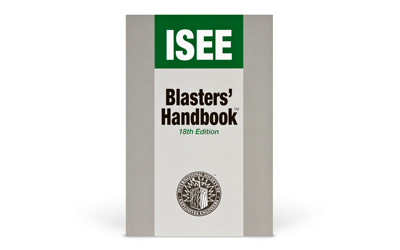 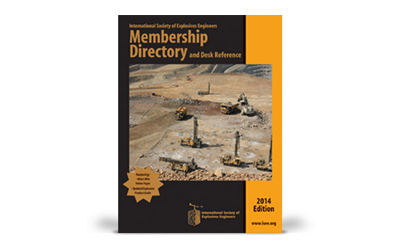 Ads start at $125. Reserve yours today. Download an order form here. The deadline to reserve your space is Tuesday, March 31. For more information, contact Dede Manross at 801.942.5650 or This email address is being protected from spambots. You need JavaScript enabled to view it.. 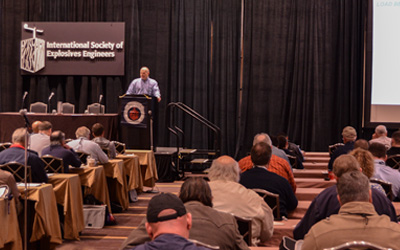 More than 1,400 people from around the world met Feb. 1-4, 2015, in New Orleans, Louisiana, for the 41st Annual Conference on Explosives and Blasting Technique, the world’s largest conference on explosives engineering.

And for the third consecutive year, the SEE Education Foundation live auction on Tuesday, Feb. 3 raised more than $17,000. Big-ticket items included a one-of-a-kind, handmade Education Foundation quilt; a lifetime membership to ISEE; and a helicopter ride for two at the Mendenhall Glacier in Juneau, Alaska.

The annual awards banquet, also on Tuesday, honored people who made outstanding contributions to the explosives engineering industry.

William A. Hustrulid, Ph.D., was honored with the Distinguished Service Award for his more than 35 years of work with the ISEE and in the mining industry. Hustrulid was instrumental in the review of the 17th and 18th editions of the Blaster’s Handbook, and he has been an indispensable resource to the mining industry.

Ron Mask was this year’s Industry Service Award winner, whose personality, background and work ethic helped develop Instantel into a worldwide leader in monitoring instrumentation. He has always been a support of ISEE, local ISEE chapters and industry conferences.

The ISEE President’s Award, which is given to those who have unselfishly given their time and talents to the society, was awarded to Brad Brown, Cloud Peak Energy Resources LLC; Lawrence Mirabelli, Buckley Powder; and Enrique Munaretti, Ph.D., Federal University of Rio Grande do Sul.

William Hissem, Sandvik Construction, was awarded the ISEE Driller’s Leadership Award for the extraordinary amount of time and knowledge he has given to help drillers. And James H. Redyke, Dykon Explosive Demolition Corp., was honored with the Blaster’s Leadership Award. Mary Spena-Bosch, ISEE, was also recognized for her 10 years of service with ISEE.

The next Annual Conference on Explosives and Blasting Technique will be from Jan. 31 – Feb. 3, 2016, at the Paris Hotel in Las Vegas, Nevada. Stay tuned for more information.

The conference is an intensive three day event that brings together mining companies, drilling and blasting suppliers and government agencies. The focus is innovation, safety and government regulation.

The Spearfish Holiday Inn Convention Center has special room rates of $95.99 per night for a single/double or $125.99 a night for a suite. For an additional $10, rooms can be poolside. To get the special room rates, use the group code BIW when booking. Reservations can be made at www.holiday-inn.com/spearfishsd or by phone at 605.642.4683.

Visit the students section of our website to download the 2015 application. Only complete application packets emailed to This email address is being protected from spambots. You need JavaScript enabled to view it. will be considered. The deadline is June 1, 2015.